It's Rafa's 1st halloween! She had been to two Trick or Treats last week (Gabbie had been to four!). The first one was in our village where we dressed her up as Rapunzel sans the long blonde hair (didn't want to risk her skin with wigs) and the iguana (?) We have a toy frog that looks like almost the same as Pascal but we were so in a hurry to make it to the assembly we forgot to put it on her. 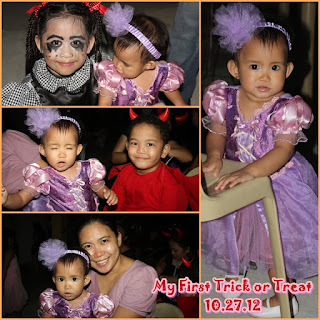 Ate Gabbie was in her angel costume again, minus the wand (she had it during the school ToT). 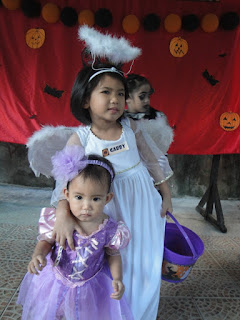 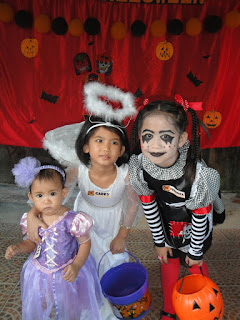 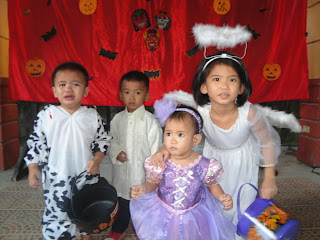 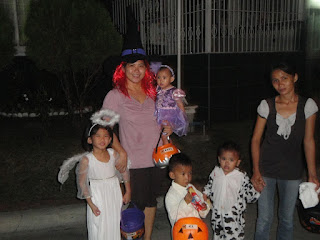 The following day (Oct 28), we were in Robinsons Metroeast and Rafa was in her Bumble Bee costume with the antenna and all, and Ate Gabbie played with her red wig and declared that she was a red-haired fairy. 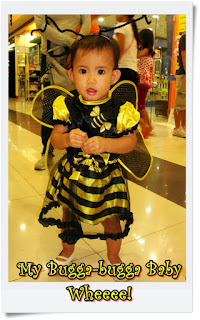 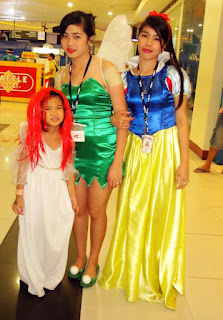 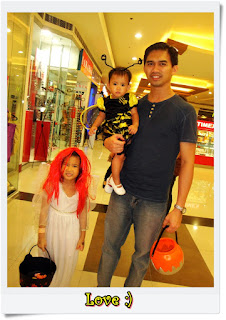 And then earlier in SM Marikina, we went to see the Halloween Costume Contest and also join ToT. Gabbie was in her tutu ala ballerina. No more dressing up for Rafa because we were already late. Haha.. 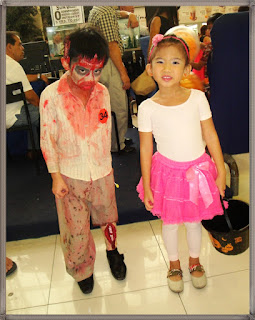 For next year, Gabbie mentioned she wanted to be Tinkerbell. We'll see if she doesn't change her mind after watching Barbie or Toy Story or Powerpuff cartoons again. :)


a day in the life of poison ivy No comments: 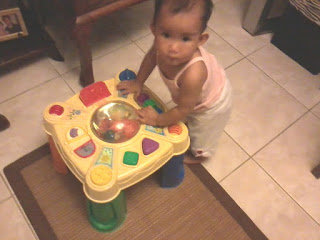 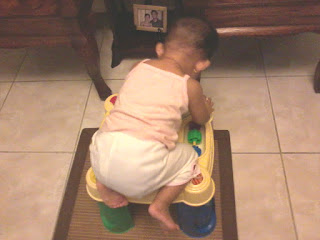 Here, look at Gabbie when she was about the same age 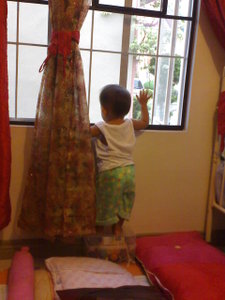 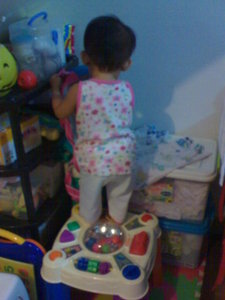 I can see they're gonna be bungee-jumping buddies one or two years from now.

When I was single, my yearly Christmas wish would be for us Filipinos to have a crime-free Philippines and for all of us humans to have a pollution-free world to live in.

When I got kids already, of course I still wish for that but the number one on my list became 'to live long enough to witness my kids fulfilling and achieving their dreams'.

A few days earlier I asked her what she would want to do during the sem break. She said she wanted to ride a firetruck and drive an ambulance. I told her, 'ok, we'll see'.

Today when we passed by the Marikina Fire Station, she mentioned about her dreams again. So I brought her to the firefighter's office and helped her realize her dream of riding a firetruck. She told the firefighters what she wanted. Her favorite community helpers happily granted her wish. 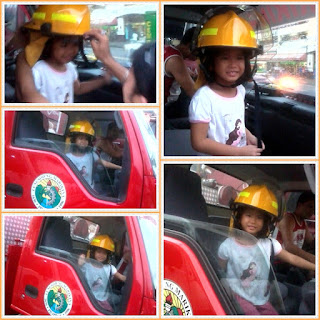 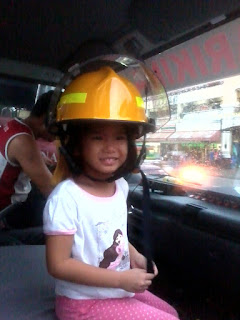 They even let her wear a firefighter's hat and they even turned the lights of the truck on. My daughter was soooo proud of herself. I could tell.

On the way home she told me she was really happy.

I wouldn't be surprised if the next thing that she'd want to do would be to ride a firetruck with the firefighters on the way to save people from a burning house.

I know it's not impossible and it would be a great experience. But how? That we have yet to figure out.


a day in the life of poison ivy No comments:

This year's Trick or Treat

She said she wanted to be Jessie (of Toy Story) this year. We went to several toy and costume stores in different malls but we could not find a Jessie costume nice enough for her taste. I thought of having it customized by our suking mananahi like what we did last year for her Powerpuff attire 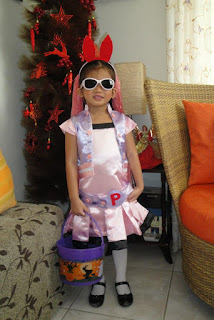 But with the 2nd quarter exams coming and preparations for Rafa's party, I decided against going to Marikina or Masinag market to find a mananahi that's not too busy with the United Nations, Cosplays, etc. I don't want to stress myself with looking for the best looking Jessie costume that we can copy, finding the right fabric and going back to the seamstress several times for the measurement, fittings, repairs, etc.

So I convinced her to be a different character instead. No way she will wear a costume that's scary so being a witch or a white lady is already not considered. I don't want her to be a princess naman- kahit sino pang princess yan. So I asked if she wanted to be an angel. I was glad she said yes. 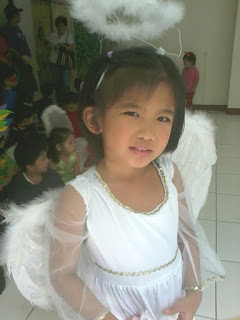 I had to re-sched my knee therapy last Saturday to attend the Tip Tap Party hosted by Tip Tap and Tickled Moms. Events such as this should not be missed. I knew that the kids would have a great time and I knew there'd be lots of goodies and activities that Gabbie and Rafa would enjoy.

Turned out it was really worth it (canceling my therapy, that is). Rafa was on the play floor most of the time playing while Gabbie joined the games and won most of them. She took home A LOT of toys and prizes for joining Trip to Jerusalem, Bring Me and Shirt Designing activity. Oh they also had cupcake decorating activity where Gabbie did 3 or 4 cupcakes I guess, and topped them with candies in various designs to her hearts content.

Aside from the yummy food and treats (love love love the spaghetti and cheese sticks and the cupcakes!), there were a lot of freebies, too! We went home with a bag filled with chocolates, cookies, Nutri-Del rice cereal (which Rafa sooo loved she really asked for a second helping), baby colognes, powder, etc.

But the best part of it was the free Tip Tap shoes that owner Ian Yao gave away for all the babies present in the party. I got a pair of pink size 12-18 month mary janes for Rafa, perfect for her pink dress and pinky pinky Hello Kitty party next month :) 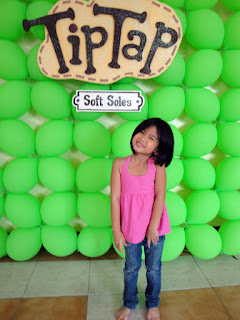 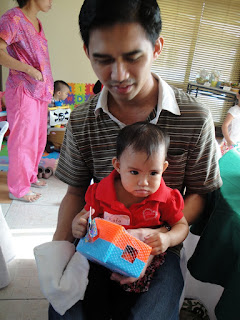 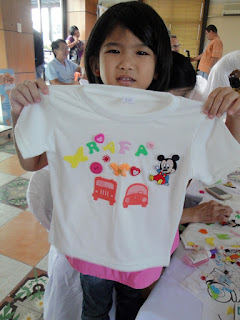 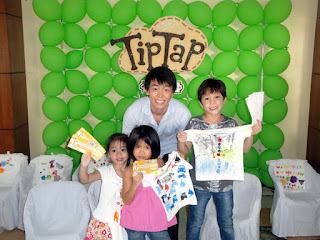 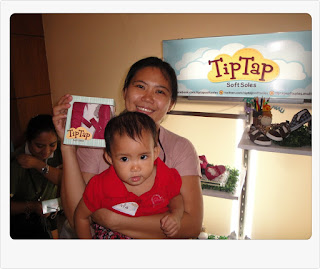 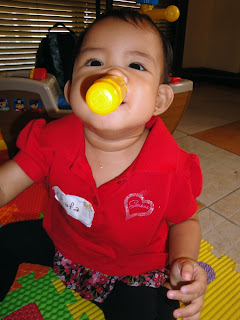 Confirmed! She's a mermaid in her previous life. :)

And I'm starting to believe that swimming is for her, and she is for swimming. Nobody taught her this. It was never taught in her swimming lessons.

Gabbie surprised me one day when she read an entire book (I'm A Big Sister) on her own with only a few complicated words pronounced like she was reading in Filipino.

But just a few days ago I heard her reading something in the garage. She was looking at an empty carton that was folded and kept in one corner for disposal.

At first I thought 'ok, simple CVC, CCVC- kayang kaya mo na yan'. But when I turned to look at what she was reading, I was even more surprised. 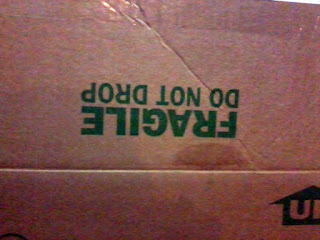 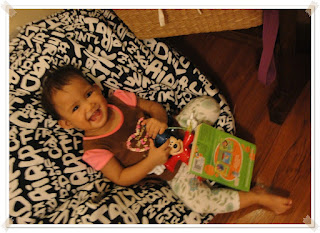 Rafa's 11th month fell on an Sunday so it was given that we would be out the entire day. I had my therapy in Med City at 8AM then we went to hear the mass/novena in Baclaran. After a semi-quick lunch in Max's where Rafa and Gabbie had lomi and chicken, we went straight to Nuat Thai for daddy's massage appointment. While daddy was having his 'me time', the girls and I stayed in the nearest Starbucks (in Katipunan) to satisfy Ate Gabbie's coffee craving. But we ended up getting a Strawberry Frappe instead. Rafa slept a few minutes after we settled (breastfeeding in Starbucks- check!) and after an hour or so, daddy  followed us but we went back to Nuat Thai so I can also have a massage (inggit lang!).

We went to a grocery and ended the day with a pizza as our dinner at home. We're saving the pancit and cakes and ice cream for her big day a month from now.

Time indeed flies when you're having fun.
a day in the life of poison ivy No comments: